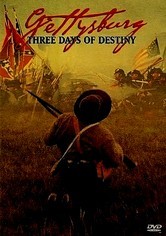 2004 NR 1h 30m DVD
To commemorate the 140th anniversary of the Battle of Gettysburg, 15,000 Civil War buffs got together on the very fields where the battle took place for a spectacular reenactment of epic proportions. Director Robert Child was there to capture the colossal occasion on film, as were actors James Choate and Patrick Falci, who helped re-create the many intricate battle scenes.