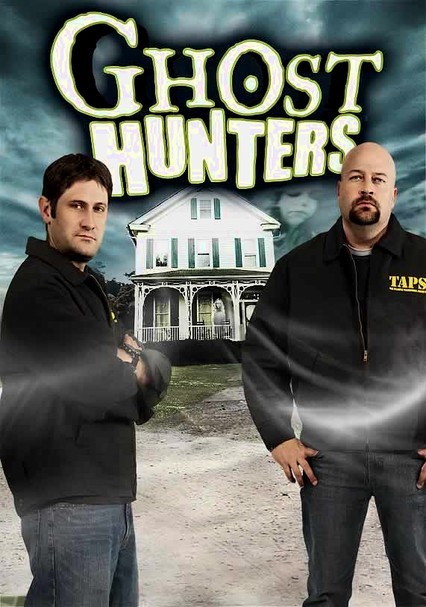 2004 TV-PG 5 seasons
Plumbers turned paranormal investigators Jason Hawes and Grant Wilson head up a team of experts who travel the country chasing reports of ghostly happenings: lights that turn on and off, objects that move on their own and other mysterious phenomena. Over the course of this SyFy series, Hawes and Wilson descend on spooky sites like the infamous Lizzie Borden house, the Waverly Hills Sanatorium and the Essex County Penitentiary.

From the Sci-Fi Channel comes this popular series, a documentary-cum-soap opera that follows real-life ghost busters Jason Hawes and Grant Wilson as they investigate haunted houses throughout the country. Plumbers by day, the spectral sleuths head up a group of ordinary people who share a passion for getting to the bottom of otherworldly disturbances -- from friendly poltergeists to spookier apparitions.

The second season of this hit Sci Fi Channel reality show follows self-described skeptics Jason and Grant as they snoop around at Myrtle's Plantation in Louisiana and investigate a haunting aboard the USS &NFiNorth Carolina&NFi_;, among other adventures. The pair investigate some seriously spooky phenomena and try their best to debunk what they see -- but sometimes, the evidence they need to rule out a ghostly presence simply isn't there.

From the plantation seen in Interview with a Vampire to the most haunted ship in the U.S. Navy, Jason Hawes, Grant Wilson and the rest of the Atlantic Paranormal Society (TAPS) crew travel coast to coast investigating spooky sightings. In these episodes, the guys check out a neighborhood pool hall where customers can be heard carousing when the joint is closed and empty; visit a phone-less sanitarium that's been placing 911 calls; and more.

Join veteran ghost hunters Jason Hawes and Grant Wilson as they embark on a fifth season of looking into reports of paranormal activity at sites around the country, including the grand Lenox, Mass., estate of famed novelist Edith Wharton. The spirits also call to Hawes, Wilson and their intrepid fellow investigators from -- among other places -- a New Hampshire resort community, the Georgia Aquarium and a New Jersey insane asylum.

Grant Wilson, Jason Hawes and their team of fearless investigators return for a sixth season of spine-tingling encounters with possible paranormal activity in locations throughout the nation. Committed to revealing the true nature of the phenomena they study, the ghost busters use a variety of scientific methods and equipment to determine whether reported hauntings are the work of someone's overactive imagination or bona fide supernatural events.

Parents need to know that because each episode follows a group of investigators examining paranormal events, younger viewers might be frightened by the potential presence of ghosts and spirits in homes and businesses.

Curses are bleeped out.

The series supports the idea that ghosts and/or other paranormal phenomena is real.