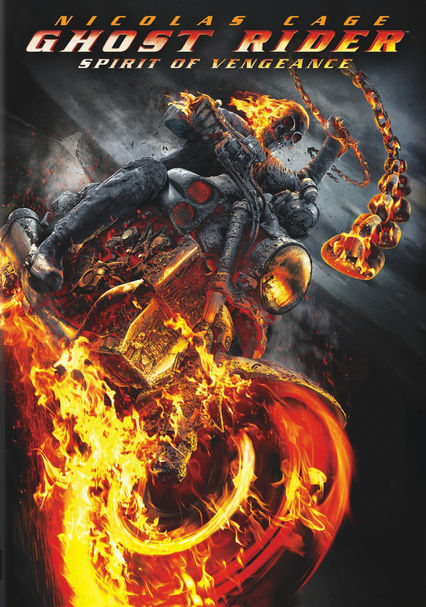 2011 PG-13 1h 35m Blu-ray / DVD
When the devil resurfaces with aims to take over the world in human form, Johnny Blaze (Nicolas Cage) reluctantly comes out of hiding to transform into the flame-spewing supernatural hero Ghost Rider -- and rescue a 10-year-old boy from an unsavory end.

Parents need to know that Ghost Rider: Spirit of Vengeance is the sequel to the 2007's Ghost Rider and is based on a Marvel Comics character (albeit one who seems more on wreaking vengeance than assisting people in need). There's lots of strong, if mostly bloodless, fantasy violence; unlike the original movie, this one is in 3-D, which makes some of the action/violence even more intense. Characters burn and decay; a woman and a boy (about 13) are slapped around; there are fights, explosions, guns and shooting; and lots of stuff catches on fire. Ghost Rider's skull face is pretty creepy, too. Language is infrequent but includes one use of "f--k"; there's also some brief sexual innuendo and a quick reference to a minor character being an alcoholic (he's shown drinking but not drunk).

In an animated graphic, the main character's bare butt is glimpsed during a motorcycle stunt. In another scene, it's implied that a businessman is trying to pick up a beautiful woman for sex, but nothing overt is said.

Very little blood, and all of the violence is heavily FX-based, but viewers do see characters rotting and burning. A boy of about 13 and his mother are in danger; they're both physically attacked, pushed around, and hit. The boy is kidnapped and treated roughly (he's injected with a needle and gets a small cut on his face). There are also threats and heavy fighting, guns and shooting, car chases, crashes, and explosions. Minor characters die. Some scary stuff (Ghost Rider's skull face is quite creepy). Characters behave angrily and crazily.

A similar message/theme as most other Marvel superhero movies: With great power comes great responsibility. Here, a character agrees to take on great suffering in order to help others. Unfortunately, his power also involves a deal with the devil, and violent behavior with no consequences goes hand-in-hand with the impulse to help.

Part of a popular comic book franchise. A Twinkie is part of a well-placed joke, but the label isn't shown, and the product isn't mentioned by name.

A secondary character is referred to as an alcoholic. He's seen drinking briefly from a flask and sipping from a bottle or two of fine wine, but he isn't shown drunk, nor does he really demonstrate alcoholism. He's also seen (nearly) lighting a cigarette.