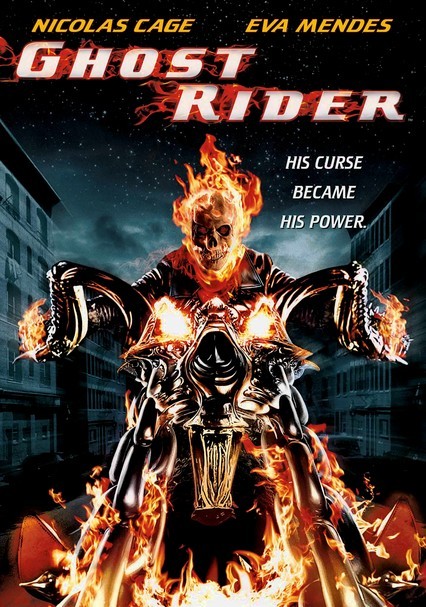 2007 NR 2h 7m DVD
Stunt cyclist Johnny Blaze makes a Faustian bargain with the sinister Mephisto to save a loved one. Years later, the devilish deal maker offers Johnny the chance to reclaim his soul by vanquishing Blackheart -- Mephisto's archenemy and son.

Parents need to know that this comic book-based movie is aimed right at kids. (They won't care that the CGI effects aren't the best and the story is uneven.) Expect frequent references to the devil and some grisly Renaissance-style images of torture. There are motorcycle crashes (one ends in a father's death), flaming leaps, falls, and skids, which produce broken-looking bodies. The villain turns victims gray and veiny, and Ghost Rider himself becomes a burning skull. Weapons include knives, shotguns, and chains. Roxy shows cleavage, and she and Johnny kiss several times (once quite passionately). Characters drink and smoke cigarettes; language includes "s--t," "damn," "son of a bitch," and "hell."

Constant cartoonish violence, mayhem, and stunts. Johnny's father dies in a motorcycle stunt; Johnny falls off his motorcycle; the devil torments him with a "burning finger" one motorcycle jump results in a brutal crash; Blackheart kills several humans by turning their faces gray and crumbly; fights between Blackheart's gang and Johnny feature violent falls, throws against walls, and slams; as the Ghost Rider, Johnny is frequently on fire (his skull face is creepy); Ghost Rider attacks and kills a mugger, who stabs him with a knife (Caretaker stitches the wound in close-up); policemen shoot repeatedly at Ghost Rider, who absorbs bullets and rides away; Ghost Rider uses a chain to whip, capture, and throw victims (demons); Johnny fights a watery demon underwater; Johnny and Blackheart fight (lots of throwing, grunting, crawling); Blackheart throws Roxy against a wall; characters shoot Blackheart with shotgun (one shot takes off his head, whereupon he's surrounded by swooping bad souls, whom he absorbs); Ghost Rider's Stare of Penance makes bad guys scream and die.

Johnny sells his soul to the devil and regrets it; demons wreak havoc; bad guys die; cops are inept.

One scene of chaos is set in a saloon (patrons and bartender are killed by demon); in other scenes, characters smoke cigarettes (Johnny's dad smokes and has cancer; Johnny later turns down a cigarette offered by a cop); characters drink beer (though, Johnny won't drink, saying, "Alcohol gives me nightmares"), and a scene dedicated to Roxy's imbibing a full bottle of wine while waiting for Johnny to show up for a date (she appears drunk at the end).