Ghosts of the Baltic Sea 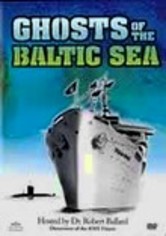 Ghosts of the Baltic Sea

2006 NR 0h 50m DVD
Documenting one of the greatest though least-known maritime catastrophes in history, this chilling program dives deep to get the story behind the Baltic Sea disaster of World War II. Undersea explorer Robert Ballard joins four survivors in a journey to the bottom of the Baltic to tell the tale of the German evacuation ships torpedoed by Soviet submarines, an assault that resulted in the deaths of more than 20,000 men, women and children.