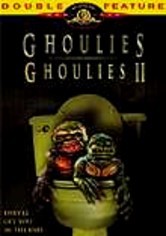 1985 PG-13 2h 51m DVD
A group of demonic, troublemaking little monsters wreak havoc in this double feature in which a young man (Peter Liapis) and his girlfriend (Lisa Pelikan) explore a house they recently inherited and unwittingly let loose six of the cursed creatures in Ghoulies. In Ghoulies II, the little nasties stow away on an amusement park ride and reenergize a dying fairground. But the creatures get ticked off after an attempt is made to exterminate them.