Giants of Rome / Kindar the Invulnerable 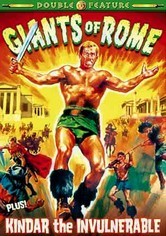 Giants of Rome / Kindar the Invulnerable

1964 NR 3h 12m DVD
Epic heroes of ancient times attempt to undo their enemies in this action-packed double bill of two 1964 features. In Giants of Rome, Richard Harrison stars as a Roman warrior chosen to go into enemy territory to destroy their secret weapon. Kindar the Invulnerable stars Mark Forest as the magical son of a sultan who is kidnapped by nomads as a child and, 20 years later, unwittingly plans to wage war on his homeland.