Giants of Thessaly / Sins of Rome 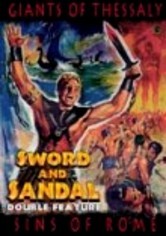 Giants of Thessaly / Sins of Rome

1952 NR 2h 38m DVD
Swords fly, sandal straps are put to the test, and ancient Romans perform feats of bravery in this action-packed double feature. Starring Roland Carey, Riccardo Freda and Massimo Girotti, Giants of Thessaly tells the tale of Jason and Orpheus encountering an evil witch, monsters and wizards on their quest for the Golden Fleece. Starring Massimo Girotti, Sins of Rome tells the tale of enslaved gladiator Spartacus, who incites a slave revolt.