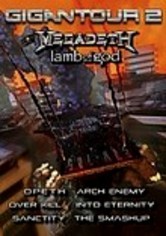 2008 NR 1h 6m DVD
Featuring performances by Megadeth, Sanctity, Lamb of God, Arch Enemy, Opeth, Overkill, the Smashup and Into Eternity, this head-banging concert video captures heavy metal warriors in action at the second ultimate shredfest, Gigantour 2. Included are three selections by Megadeth ("Take No Prisoners," "The Scorpion" and "Washington Is Next"), a Megadeth bonus track, a behind-the-scenes featurette about Gigantour 2 and more.