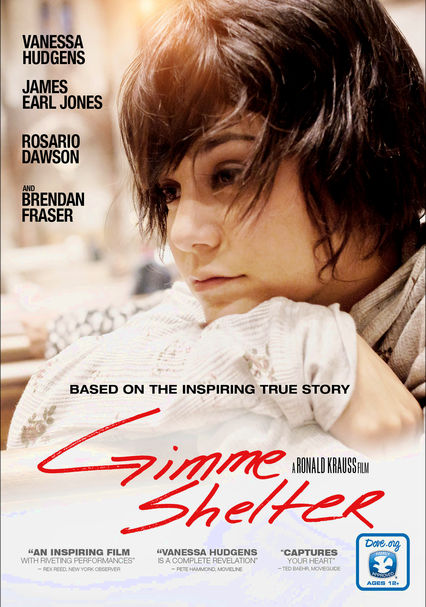 2014 PG-13 1h 41m Blu-ray / DVD
After running away from her abusive mother, streetwise teen Apple locates her father, who's never been part of her life, but he rejects her when he learns that she's pregnant. Desperate and alone, Apple seeks help from a compassionate priest.

Parents need to know that Gimme Shelter is an earnest drama, inspired by real-life events, centered around a 16-year-old who's trying to flee from an abusive mother. It deals with fairly mature themes and involves intense situations -- including a feral fight between the mother and daughter, drug addiction and teenage pregnancy -- that may prove too heavy for some teens. There's swearing, including "s--t" and "bitch," a brief scene involving drug use witnessed by a minor, and sequences that show a parent verbally and physically abusing a child.

There's talk of teenage sex and a teen is pregnant.

An abusive mother screams and manipulates her teenage child, calling her useless and other names. Later, she attempts to cut someone's face with a blade (it's a brief scene, but she draws blood). A mother and her teenage child scuffle. One character has a car accident. Nothing gory is seen but it's clear it's bad.

A fair amount of swearing, including "s--t" and "bitch." Young kids call a teen "stupid" to her face.

No matter how bleak your situation, there's a way out if you ask for help and accept it when it's offered.

Some brand names and logos are seen, including Greyhound and Mercedes Benz.

A teenager sees her mother smoking pot and drinking.