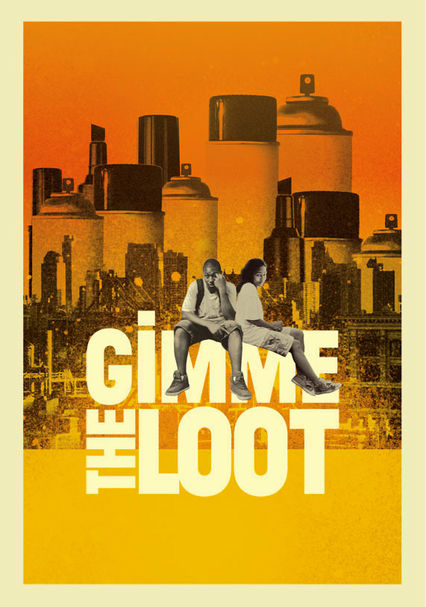 2012 NR 1h 21m DVD
Two talented graffiti artists from the Bronx are stung when a rival outfit covers their own illustration with a portrait of the Mets' Home Run Apple. They turn their outrage into a daring plan to tag the real Home Run Apple at the Mets ballpark.

Parents need to know that Gimme the Loot is a low-budget comedy-drama about two teen graffiti artists in New York City. (The title is borrowed from a Notorious B.I.G. hip-hop song.) Though they're good people at heart, they're shown stealing, selling stolen goods, dealing drugs, smoking pot, and painting graffiti. Language is also very strong, with constant use of words including "f--k," "s--t," the "N" word, and "p---y." There's a fair bit of sexual innuendo, as well as some kissing and a prematurely interrupted sex scene. Violence is also a minor issue, with a gang of kids grabbing a teen girl, holding her, and "tagging" her T-shirt. There are also several threats and arguments. The characters eventually seem to learn that their behavior is getting them nowhere and that family, friends, and loved ones are more important. Though it's not entirely admirable, many teens will enjoy this movie.

The main male character passionately kisses a girl he's just met. They begin to settle into a sexual position but are interrupted. Also lots of sexual discussion and innuendo, including a conversation about "wet dreams."

Several threats and arguments, but very little actual violence. Some teen boys gang up on a teen girl, grab her, hold her, and "tag" her T-shirt. Two younger boys steal the main female character's bike; she chases them, catches one, treats him roughly, and steals his phone.

Ultimately, the main characters seem to realize that their unlawful schemes aren't going to pay off; at that point, they begin to understand the importance of friends, loved ones, and family.

The movie was shot on the streets of New York City, and some advertising signs/logos are visible in the background, such as Haagen-Dazs, but all of it is intended as background color, rather than product placement.

One of the two main teen characters is a drug dealer. He picks up packages of pot and delivers them to clients. At one stop, he smokes some of it with a teen girl.