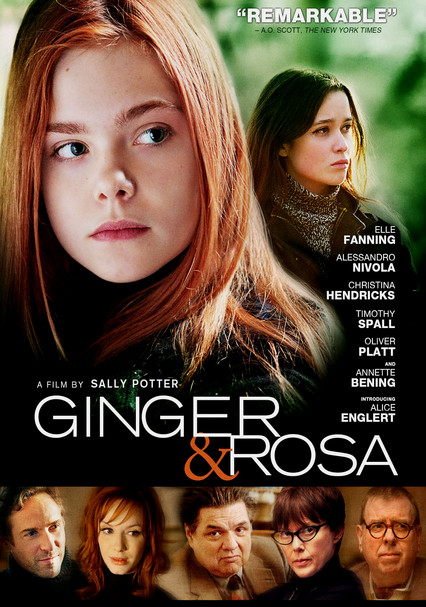 2012 PG-13 1h 29m DVD
With the Cold War looming over them, teen best pals Ginger and Rosa share everything in early 1960s London -- until betrayal drives them apart. Sally Potter directs this intimate period drama steeped in the anxieties of the dawning nuclear age.

Parents need to know that Ginger & Rosa -- a coming-of-age drama set in the early 1960s -- is at times bleak and intense, with material that may be too overwhelming for younger teens and tweens. There's infidelity, parental abandonment, a relationship between a much older man and a girl young enough to be his daughter, depression, alienation -- all set against the backdrop of the early ban-the-bomb movement and the concurrent fear of nuclear devastation. Expect infrequent language (including "f--k" and "bitch") and some scenes in which a teen girl flirts with an older man and he returns her attentions (at one point moaning is heard from their room). There are also loud fights between a couple, a scene in which teen girls prepare to practice kissing (on each other), plenty of era-accurate smoking, and some underage drinking.

Some kissing and groping, mostly in the dark. A father figure seduces a teenager, who's fascinated by him. Another teenager hears them moaning. Some allusions to a married man's infidelity. Two girls are shown about to practice kissing.

A woman slaps a teen. In another scene, protestors are hauled off by cops, a few of them forcefully. Some loud verbal arguments. The film is set in the early 1960s, and there's a pervasive fear of nuclear annihilation. Radio reports and TV newscasts obsess about it, and some clips show the bomb blowing up Hiroshima.

Infrequent use of words including "bitch" and "f--k."

The world can be bleak in this film, especially for Ginger, but her innate resilience -- and talent for poetry -- help her come through it. Themes include infidelity, parental abandonment, depression, alienation, and betraying a friendship.

Plenty of period-accurate smoking, including among teenagers. Also, underage drinking (an of-age young man buys a teen a half-pint of beer).