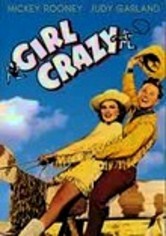 1943 NR 1h 39m DVD
Mickey Rooney and Judy Garland headline this 1943 MGM musical based on the hit Broadway show. Undisciplined rich kid Danny Churchill (Rooney) gets sent to an all-male college, where romance blooms when he meets the only girl for miles around (Garland). Just so happens she's the dean's granddaughter. The exuberant soundtrack includes such songs as "I Got Rhythm" and "Embraceable You" by the incomparable Gershwin brothers.