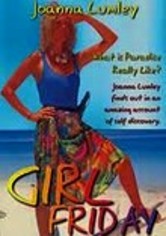 1994 NR 1h 14m DVD
British actress Joanna Lumley roughed it for nine difficult days on a remote island off the coast of Madagascar, cooking over an open fire and battling bloodsucking bugs but also tapping into her spiritual side in this early reality show. Lumley, best known for her pampered character on "Absolutely Fabulous," was forced to make do with few supplies on this 1994 show, whose success helped spawn the blockbuster U.S. reality series "Survivor."