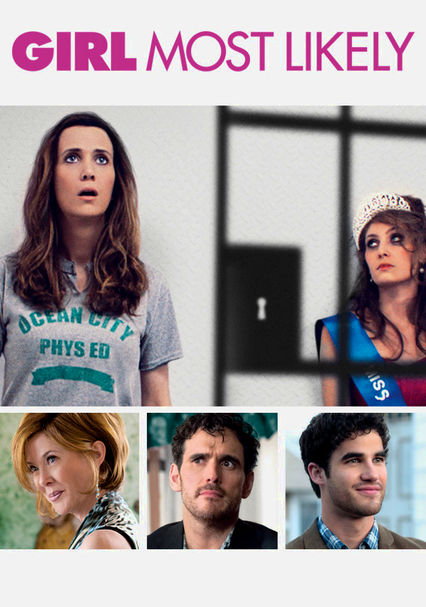 2012 PG-13 1h 42m Blu-ray / DVD
After staging an unsuccessful suicide to get her boyfriend's attention, a struggling playwright moves back home to live with her mother, her mother's boyfriend and a handsome lodger who sings with a Backstreet Boys cover band.

Parents need to know that Girl Most Likely is a dramedy that's heavier on the comedy than the drama, though the plotlines are pretty heavy and include an attempted suicide (faked), a nervous breakdown, parental abandonment, and the like. Expect some colorful language (mostly "s--t" and "hell"), heavy drinking and drunkenness, and some scenes showing couples making out heavily, as well as plenty of innuendo. There's also some gun violence; it's mostly played for laughs, but shots are fired.

Some kissing and making out in bed. No outright nudity, though characters are glimpsed in their underwear or under a sheet with shoulders bared. A conversation between two women references spanking during sex. Sexual innuendoes fly. Grinding on the dance floor.

A man points a gun at a group of people, taking a woman hostage. It's played a little for laughs, but shots are fired, and the character is menacing (even if kooky). A woman fakes her suicide and is taken to a hospital, where she's forcibly restrained after trying to fight off hospital attendants.

"Hell" and "s--t" are used occasionally.

Labels and riches don't make a person; it's your character that counts. Also, families are often a dysfunctional lot, but dysfunction doesn't mean that relatives can't find a way to connect with each other.

A woman gets wasted during a night of heavy drinking that includes shots (and body shots) and Long Island iced teas.