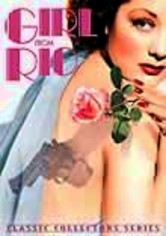 1939 NR 1h 2m DVD
When a talented Brazilian chanteuse learns her brother's been wrongfully accused of arson, she packs her things and heads to New York to bail him out. But if she wants to clear the family name, she'll have to find the real culprit -- and the only way to do that is to take a job as a singer in a popular nightclub. Kay Linaker, Warren Hull and Alan Baldwin co-star in this 1930s mystery-thriller directed by Lambert Hillyer.