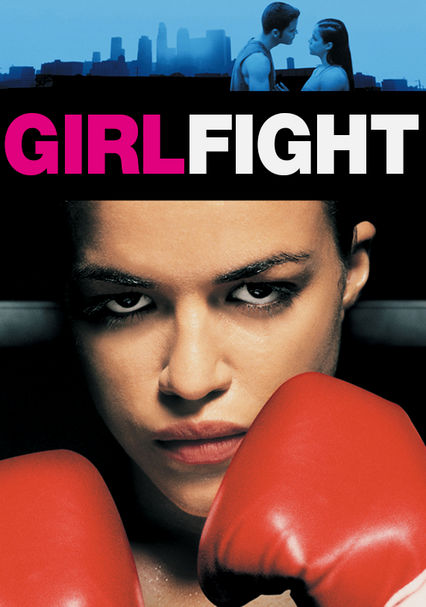 2000 R 1h 50m DVD
First-time director Karyn Kusama's powerful film tells the story of Diana (Michelle Rodriguez), a Brooklyn high-schooler who gets little support from her dismissive single father and takes her frustrations out on her classmates. But when she wanders into a local boxing gym, she's instantly drawn to the action. And though it's a male-dominated world, boxing provides her a newfound discipline and sense of purpose, as well as a positive male role model.

Parents need to know that Girlfight is about a troubled teen finding a direction to take in life and is a fairly quiet, thoughtful film. There's a lot of strong language, especially "f--k" and "s--t," but kids who can handle the language will be rewarded with a lot of food for thought from this character study that doesn't wrap everything in a bow at the end. Diana, who's 18, isn't perfect but will inspire kids to keep practicing and work hard to achieve their goals. Outside the boxing ring there are a couple of fight scenes, but none shows blood or gore. Diana and Adrian kiss a few times and lie in bed together with clothes on. Adults are frequently seen with bottles of beer, but none of the teen characters drinks.

Diana and Adrian kiss a few times. They spend the night in the same bed together and start making out. Diana is clothed and Adrian's bare torso is shown. Adrian decides to stop, and they fall asleep cuddling.

There's a lot of boxing, of course, and although a lot of the language used to talk about it is aggressive, there's no blood or gore in the boxing scenes themselves. Minor injuries such as a black eye are shown. Outside the ring, Diana gets into a fight at school that shows hits and slaps. Another fight outside the ring shows punching, kicking someone who's down, and choking. Rape and getting killed are mentioned in a conversation about life in the projects.

You can turn your life around if you can find something you love doing and are willing to work hard at it. Success doesn't happen overnight, and you have to put in a lot of practice and hard work to get something right.

Seen in the background, but not used by any characters, are Goya, Fritos, and Cheetos. A minor character puts Brooklyn Brewery beer in the fridge at a party.

Diana's father is shown with beer at dinner twice and in another scene seems somewhat drunk. Adults are frequently depicted holding beer bottles and hold plastic cups at a party, and Diana talks to a minor character while he puts beer in the fridge. A minor character has a cigarette tucked behind his ear.