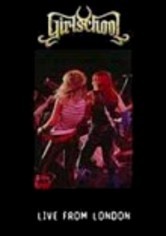 1984 NR 1h 0m DVD
British heavy metal femmes fatales Girlschool perform at London's Camden Palace in this 1984 concert. The all-girl band shot up the British charts in 1980, and collaborations with fellow Brit head-bangers Motorhead added further fuel to the band's blazing-hot reputation as women with a serious talent for heavy metal. Songs include "Nowhere to Run," "Can't You See," "Love Is a Lie," "Running Wild," "C'mon Let's Go," "Hit and Run" and "Emergency 999."