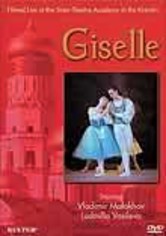 2004 NR 1h 40m DVD
Talented dancer Vladimir Malakhov stars as Count Albrecht, and ballerina Ludmilla Vasileva plays the heroine Giselle in this production filmed live at the State Theatre Academy in the Kremlin. Considered one of the most romantic ballets, Giselle tells the tragic tale of a young peasant girl who falls in love with an unscrupulous man who doesn't deserve her -- and who eventually rejects her. Ultimately, Giselle takes her own life.