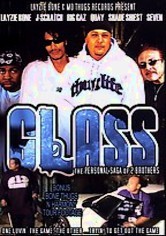 2007 NR 2h 0m DVD
This docudrama follows the real-life travails of Big Caz, a Los Angeles-based ex-gang member and drug pusher who withstood a hardscrabble upbringing on the tough streets of the city during the 1970s and '80s. Caz and his little brother Glasshouse (played by Layzie Bone from Bone Thugs-N-Harmony) are torn apart by an abusive mother and the tough choices demanded of those who are born and raised in the ghetto.