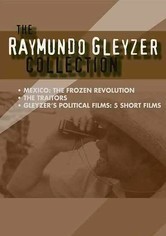 1971 NR 1h 30m DVD
These short films from Argentinean filmmaker Raymundo Gleyzer showcase his commitment to creating revolutionary works for his countrymen. Involved in several radical creative groups, Gleyzer "disappeared" at the hands of his government in 1976. The films are "Swift," "Don't Forget, Don't Forgive" "The AAA Are the Armed Forces" and "They Kill Me If I Don't Work. And If I Work, They Kill Me."