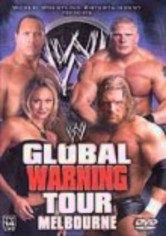 2002 NR 3h 0m DVD
The WWE travels Down Under for hours of raw action from the Global Warning tour in Melbourne. The Rock, Triple H and Brock Lesnar face off in an Undisputed Champion match, while Chris Jericho takes on the Edge in a can't-miss showdown. Also, Stacy Keibler battles it out with Torrie Wilson in a hot Bra and Panties match. Highlights from 1986 -- when WWE last visited Australia -- include a bout featuring the late Andre the Giant.