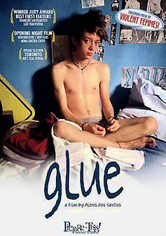 2005 NR 1h 50m DVD
Fifteen-year-old Lucas (Nahuel Pérez Biscayart) is dealing with the fallout from his parents' breakup, the new feelings he's having for his best friend, Nacho (Nahuel Viale), and the band he's trying to form. Together with awkward Andrea (Inés Efron) and armed with a bottle of glue, Lucas and Nacho confront the pains and pleasures of adolescence. This coming-of-age drama from Argentina marks writer-director Alexis Dos Santos's feature debut.