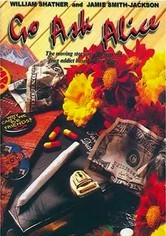 1973 NR 1h 11m DVD
When she falls in with the wrong crowd, a shy teenager named Alice (Jamie Smith-Jackson) slowly descends into a world of drugs and prostitution -- much to the growing horror of her suburbanite mother (Julie Adams) and father (William Shatner) -- in this antidrug melodrama. Based on the 1971 best-seller that claimed to be a real teen's diary, the made-for-TV movie co-stars Andy Griffith as a caring priest who reaches out to the wayward Alice.