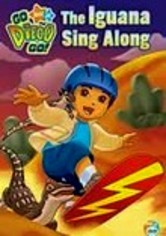 2007 NR 1h 38m DVD
In four musical episodes, swashbuckling Diego and his pals share a series of adventures. Diego steers an iguana home in time for a sing-along, rescues two river otters, escorts a llama to the library and assists an anaconda in finding a new home.