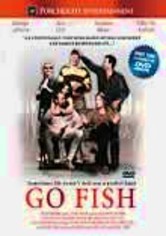 2000 NR 1h 30m DVD
Ari Celi, Kristen Shaw, Polly LePort and George LePorte head the cast in this thought-provoking ensemble drama based on a stage play by Donald Wayne Jarman. After their mother's death, a group of dysfunctional siblings rendezvous at the family cabin to decide who will take care of their developmentally challenged brother. But the future they're struggling to solidify depends largely on their capacity to forgive old wounds.