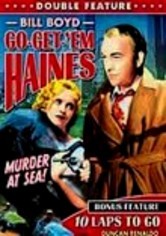 1936 NR 2h 9m DVD
It's a murder mystery on an ocean liner and revenge on a racetrack in this action-packed double feature. In Go Get 'Em Haines, investigative journalist Steve Haines (William Boyd) is hot on the trail of an elusive con man until a brutal murder casts suspicion on the newspaperman. In 10 Laps to Go, a rivalry speeds out of control between two hotshot drivers, and a steamy affair threatens to bring the bitter race to a final crash and burn.