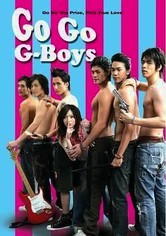 2007 NR 1h 30m DVD
Best buddies Hong and Shin will do anything for each other, so when Hong's girlfriend runs up a mountain of debt and he enters a gay beauty contest to raise funds, Shin joins him for moral support. Problem is, Shin is gay, but Hong isn't (or so he says) -- which flies in the face of pageant rules. Chaos ensues as the two vie for the crown in this comic Taiwanese import starring Zheng Gang Tang and Fa-Yang Yu.