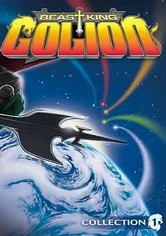 1999 NR 3 discs
Five explorers are captured by the evil Emperor Daibazal and sent to the planet Altea, where they learn of the mighty Golion robot. The discovery might just turn the tide against Daibazal in the first 18 episodes of the Japanese cartoon. Much of the animation was later used -- with different story lines and characters -- in the U.S. series "Voltron: Defender of the Universe." This collection reveals the original stories newly restored and uncut.