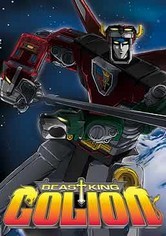 1981 NR 3 discs
In the aftermath of Earth's destruction, five interstellar travelers are enslaved by the Galra Empire. From their new home planet of Altea, the heroes pilot the mighty robot Golion into battle against the evil Daibazal and his Deathblack Beastmen. This volume includes episodes 19-52 of the original series that was later edited into "Voltron: Defender of the Universe." Darker and more complex, this version brings new elements to the classic story.