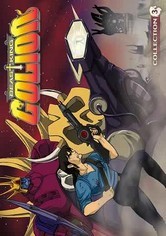 1981 NR 3 discs
After defeating Prince Sincline and his evil Galra Empire in an intense battle, the Go-Lion team gets its paws on a ferociously powerful cannon. Joining forces with the other slave planets of Galra, our heroes concoct a daring scheme. Aiming the cannon at the protective force field-protecting Galra, the Go-Lion team plans a full-scale attack on the tyrannical empire in this third volume of the beloved Japanese cartoon.