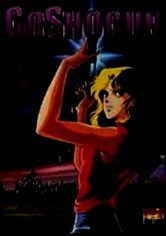 2000 NR DVD
This early Japanese animation flick follows Remy, the only female fighter on the Goshogun team of good guys, as she cheats death time and time again. As a child, Remy manages to escape from a death pit and later in life survives a car wreck. Now she fearlessly battles zombies, ghosts and panthers in the dusty desert. Released in 1985, this film was a follow-up to the popular television series and offers a peek at the origins of modern anime.