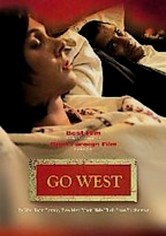 2005 NR 1h 37m DVD
While trying to flee war-torn Sarajevo, Muslim cellist Kenan (Mario Drmac) disguises himself as a woman to avoid questioning by the Serbs. Together, he and his star-crossed gay lover, Serbian student Milan (Tarik Filipovic), must keep up the charade long enough for them to escape. Director Ahmed Imamovic weaves elements of farce and satire into his wartime romance, the first gay-themed film out of Bosnia-Herzegovina.