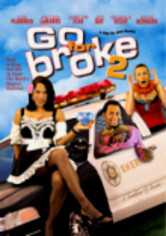 2005 NR 1h 24m DVD
When their friend Ramses is kidnapped and held for ransom by a nasty correctional officer, friends John and Darnell come up with a crazy plan to raise his $20 million ransom in this urban comedy. The two dress up as women in order to steal an enormous diamond from an African prince, but before they can get their hands on the gem, they must deal with a sex-crazed tycoon and a pair of ex-convicts. Johann John Jean and Larry "Flash" Jenkins star.