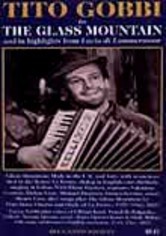 1950 NR 2h 0m DVD
Acclaimed Italian baritone Tito Gobbi is transcendent in this 1950 British musical-drama, a compelling story of love and opera. The maestro's deep, rich voice has never sounded better than right here in this thrilling performance captured on video. Clips from the 1948 Rome Opera performance of Gaetano Donizetti's "Lucia di Lammermoor," in which Gobbi starred with Lilliana Rossi, are also included.