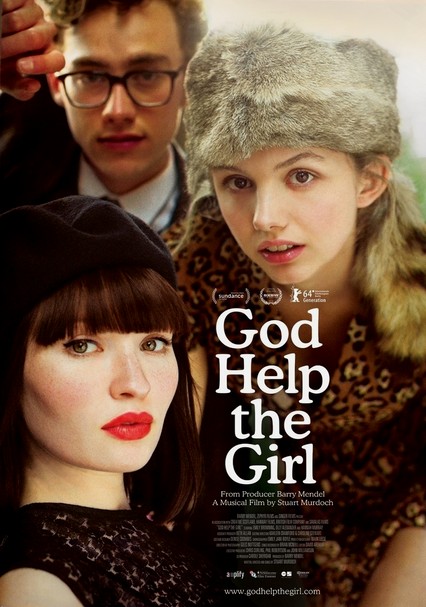 2014 NR 1h 52m DVD
This musical by Stuart Murdoch -- of the indie band Belle and Sebastian -- follows Eve, whose gift for songwriting sees her through a troubled life. Her talent takes her to Glasgow, where she finally meets others who share her passion.

Parents need to know that God Help the Girl is an indie musical featuring the songs of writer-director Stuart Murdoch, lead singer of popular Scottish pop band Belle & Sebastian, and starring Emily Browning as a teenager who processes her problems through song. The movie's characters deal with some heavy issues: eating disorders, mental illness, depression, attempted suicide, and more. Language isn't frequent but does include a few uses of "f--k" and "s--t" and insult language. The main character sleeps with a good-looking musician (they're shown bare-shouldered in bed together) and kisses another. There's also some drinking, but it's worth remembering that it's legal for 18-year-olds to drink in Scotland, where the movie takes place. Despite the movie's mature themes, the music is alternately wistful and bubbly, and God Help the Girl is ultimately a hopeful story about following your dreams and healing your wounds through art.

Some kisses and one bedroom scene that makes it clear that Eve is "shagging" a band's frontman. They're shown in bed together, bare shouldered (him barechested) and kissing. Later she wears just a shirt and panties and kisses a guy, but they don't have sex.

The main character is in the hospital for an eating disorder and later, after taking too many pills, has to be taken back to the hospital. A drummer and a singer get into a scuffle.

Amid heavy themes (eating disorders, mental illness, depression, attempted suicide), the movie's message is that you should follow your dreams and stay true to your art. It's also about figuring out what you want to do "when you grow up."

Young adults of indeterminate age drink at a music club, but it's legal for 18-year-olds to drink in Scotland. A character is hospitalized after taking too many pills.