God Is on the Air 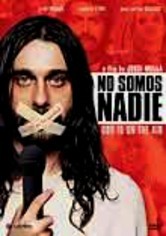 God Is on the Air

2002 R 1h 31m DVD
While panhandling in the subway, Salva (Jordi Molla) and his buddy (Carlos Vellido) have an epiphany: They realize they could make a lot more money robbing people, so they decide to hawk a home-brewed "healing potion." When Salva is unjustly jailed, the corrupt host of a reality show attempts to have him put to death to boost the show's ratings. But people begin to rally behind Salva's cause, and he becomes an improbable folk hero.