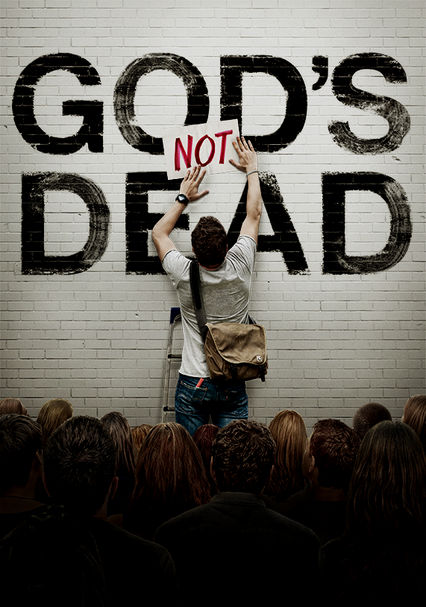 2014 PG 1h 52m Blu-ray / DVD
When college student Josh Wheaton encounters an atheistic philosophy teacher who insists that his students will only pass by admitting that God is dead, Josh dedicates himself to proving the professor wrong about God.

Parents need to know that God's Not Dead is an earnest, heavy-handed, faith-based movie that responds to doubts that atheists have about God by way of the film's main character, a college student named Josh. There's no cursing or sex and only social drinking by adults, but there is an accidental death and a scene in which a man hits his daughter. Young kids might find the characters' debates around religion and philosophy confusing and too mature to grasp, though older tweens and teens might admire Josh's ability to stand up for his beliefs.

Some yelling. A car hits a pedestrian in a fatal accident. Viewers don't see anything too gory, but the man is shown dying. A man is also shown hitting his daughter.

Fight for what you believe in, even if that means going up against people who doubt you, because in the end you have to live with yourself.

The film is practically a commercial for the Newsboys, a Christian band whose posters and T-shirt logos are front and center in much of the film; there's also actual performance by the group. Plus, Cristal is name-checked, and everyone has iPhones and Apple computers. Duck Dynasty's Willie Robertson makes an appearance.

Some social drinking by adults at a dinner party.