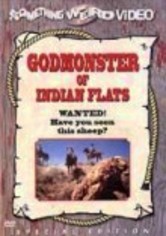 1973 UR 1h 29m DVD
In this weird 1970s drive-in monster flick, a sheep infected with poison gas from an abandoned mine gives birth to a monstrous offspring. Growing to eight feet in less than a week, the creature terrorizes the citizens of a small Nevada town. The community's mayor (Stuart Lancaster), already feuding with an out-of-town developer (Christopher Brooks), finds a bizarre way to exploit the beast for financial gain and put the sleepy town on the map.