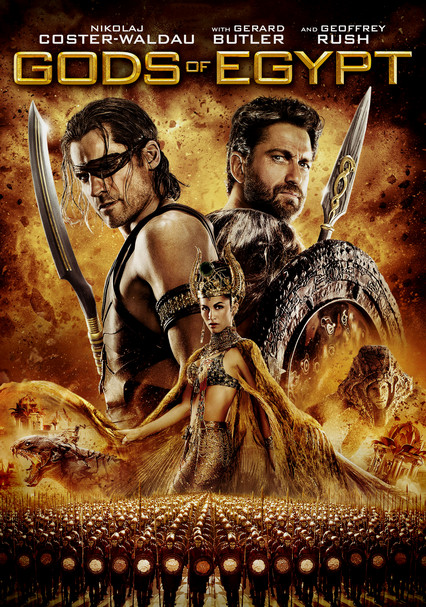 2016 PG-13 2h 7m Blu-ray / DVD
In this epic tale inspired by Egyptian mythology, Horus, the god of the sun, vows to avenge his father's death at the hands of Set, the god of darkness. As Horus joins forces with the goddess of love and a mortal thief, a mighty battle takes shape.

Parents need to know that Gods of Egypt is an epic action fantasy with lots of violence (chiefly via sword and hand-to-hand battle), though most of it isn't too gory (even decapitations and mutilations are shot in such a way that they aren't particularly graphic). Strong language is limited to very sparse uses of "ass" and "s--t," but there's a fair bit of suggestive material, including sexual innuendo, implied nudity/sexual relationships, and one scene that shows the before and after of sex but not the act itself (bare backs and the side of a breast are shown). The gods enjoy drinking, and a couple of characters act drunk and/or hung over at different times. The ancient-Egypt-set film stirred such a social media controversy over its predominantly white cast (lacking any discernable Egyptian or Middle Eastern actors) that the director publicly apologized for not making the ensemble more diverse.

Naked couple shown in bed together (strong implication of sex); bare shoulders, backs, and a male chest are seen, as is the side of one breast. The man gets out of bed naked, and another man looks down (presumably at his penis) and raises an eyebrow. A young woman's silhouette is visible as she changes behind a screen. Several female characters wear very revealing dresses (i.e. cleavage) and are ogled by male characters. A young couple lives together; it's implied that they're lovers, but they don't do more than kiss a few times (once on a bed), and it's unclear whether they're technically married. Both Horus and Set are shown shirtless and naked (off camera) in a couple of scenes. The Goddess of Love has a sexual relationship with two different characters. A woman asks a man if he prefers her "view from behind."

High quantity of violence, but it's not gory or bloody (when they do bleed, the gods bleed gold). The body count includes scenes of stabbing, decapitation, cruelty (e.g., a god who cuts off his ex-wife's wings and then kills her and also pokes out his nephew's eyes). Several big hand-to-hand battles with swords/spears. In some cases, the fighting leads to buildings crumbling. Two of Set's bodyguards pursue Horus and Bek on giant snakes that spew poison.

Even one individual can do the extraordinary with devotion, discipline, and the right kind of help. Also encourages the idea of making sacrifices for those we love and having faith in the impossible. On the other hand, the fact that the cast of this story set in ancient Egypt is predominantly white has caused many raised eyebrows about the message that sends to audiences.

It's implied that a god is hung over; it's clear he had a big party the night before (people are strewn all over a room, some with drinks in hand). Horus asks whether Bek has wine to bring him, as it's the only thing that would grant Bek an audience. A goddess drinks from a flask and walks unsteadily, as if drunk.