Gods of the Plague 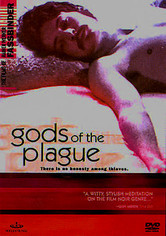 Gods of the Plague

1970 NR 1h 28m DVD
Director Rainer Werner Fassbinder's sequel to his own Love Is Colder Than Death finds Franz (Harry Baer) just released from prison and in fast cahoots with his brother's murderer (Gunther Kaufmann). While the pair plans a robbery of a supermarket, Franz rekindles an old flame (Hanna Schygulla) and lights several new ones. Munich's directionless, grim youth culture is the focus of this bleak crime drama by the acclaimed German auteur.