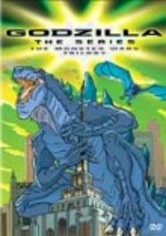 2004 TV-Y7 1h 4m DVD
These three episodes from the animated series featuring the beloved lizard of lore explore the Monster Wars, a bitter fight for supremacy among Godzilla and foes such as the amped-up Cyber Godzilla, the water dinosaur Cryptocledius and a Giant Bat. Also included in the mix are erstwhile fighters King Cobra, C-Rex, the Rat and Queen Bee. In the meantime, scientists Hicks and Heat continue their rivalry, in spite of the dangers surrounding them.