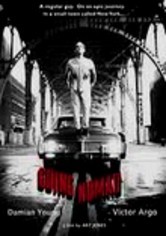 1998 NR 1h 37m DVD
When night falls, bored 33-year-old El Cid (Damian Young) takes to the Manhattan streets with the Asphalt Nomads, a group of lonely dreamers who cruise New York in big cars until dawn. Art Jones' comedy drama was a film festival hit. The quirky indie was nominated for Best Feature at the Cinequest San Jose Film Festival and for the Golden Starfish Award at the Hamptons International Film Festival.