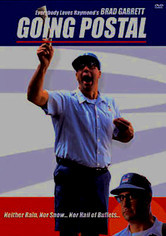 1998 NR 1h 38m DVD
When psychologist Nicholas Brink (Richard Portnow) decides to take his research on human behavior into the local post office in this comedy, he discovers that it isn't just his primary subject, Orsen Starks (Brad Garrett), who's about to "go postal." Everybody else is on the edge of losing it, too. To make matters worse, the postmaster's got his eye on them all, waiting for them to slip up.