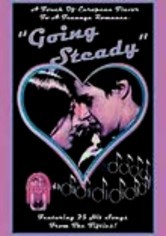 1979 NR 1h 26m DVD
In this nostalgic sequel to the Israeli hit Lemon Popsicle, three teen pals on the brink of manhood look for love, sex and a good time, set to a soundtrack of beloved 1950s rock 'n' roll. Benzi (Yftach Katzur) is the sensitive romantic, Yudale is shy and overweight (Zachi Noy) and Momo (Jonathan Sagall) is the ladies' man. Hugely popular in Israel, Going Steady was the first of many Lemon Popsicle sequels, including Hot Bubblegum and Baby Love.