Going to Hell: The Movie 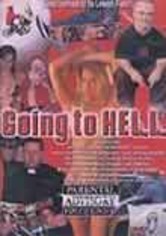 Going to Hell: The Movie

2003 NR 0h 51m DVD
The notorious Jason "Wee-Man" Acuna hosts this collection of clips that showcase some of the most extreme acts ever captured on tape. Music by Oakland, Calif., punk rock stylists Cheapskate provides the backdrop to this freaky retrospective, which includes nude stunts, gross-out pranks, wacky set-ups, insane attempts and more. Features an appearance by the infamous nude model Taylor Love.