Golden Age of Cartoons: The Complete Adventures of Cubby Bear 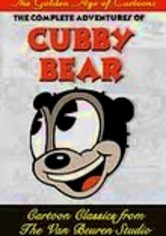 Golden Age of Cartoons: The Complete Adventures of Cubby Bear

2006 NR 2h 17m DVD
Created as a potential rival to Disney powerhouse Mickey Mouse, the character of Cubby Bear starred in 20 cartoons produced by the short-lived Van Beuren Studio in the 1930s. The brainchild of studio animator Mannie Davis, Cubby Bear cartoons are distinguished by their zany energy and surreal images -- all to the tune of lively jazz soundtracks. This video assembles all of Cubby's cartoons, including one that was never released.