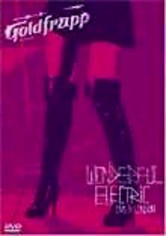 2004 NR 2 discs
Britain's moody electronica ensemble Goldfrapp hypnotizes audiences at two sold-out London engagements in this concert DVD. In the first show, recorded at Shepherd's Bush Empire in 2001, Goldfrapp performs songs from their "Felt Mountain" album, then fills the night air with otherworldly sounds from their album "Black Cherry" in the second concert, filmed on the Somerset House grounds in 2003. Extras include two documentaries.