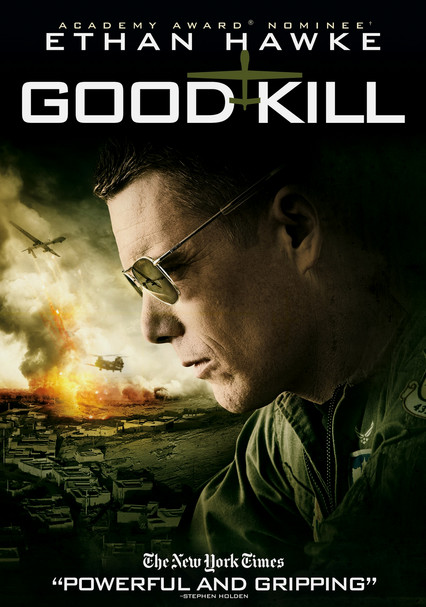 Parents need to know that Good Kill is a war-related drama about a U.S. Air Force pilot (Ethan Hawke) who now fires drones at Middle Eastern targets from a safe bunker in Las Vegas. There are scenes of shocking, upsetting violence when victims are shown dying in explosions (seen via video monitors). And a man rapes a woman, twice, while airmen watch helplessly from their monitors. The main character has moments of explosive rage/violence himself and briefly strikes out at his wife. A married couple has sex; there's also some flirting and heavy sexual innuendo. Language is nearly constant, with "f--k" and "f---ing" both used a ton. The character also drinks very heavily -- and sometimes secretly, making it seem like he's on the verge of addiction. Characters also smoke, and there's a reference to cocaine. Though the movie isn't very subtle, it offers many thought-provoking themes for older teens and adults to ponder and discuss.

A husband and wife have sex; she's on top, but there isn't any graphic nudity. Heavy sexual innuendo. Reference to oral sex. Flirting between a married man and another woman.

A man hits a woman and rapes her, twice, as seen from satellite cameras. Explosions, death, and destruction as shown on a video monitor. A man has explosions of temper. He briefly hits his wife, then punches a mirror.

Raises interesting questions about the nature of war, giving older teens and grown-ups something to really think about and talk about.

Mention of Ferrari and Ford.

The main character seems on the verge of being an alcoholic; he sneaks drinks from a bottle of vodka in the bathroom and drinks in the car -- he's pulled over for drunk driving. Also beer drinking at parties and cigarette smoking. Reference to "coke" (cocaine). "War on drugs" is mentioned.