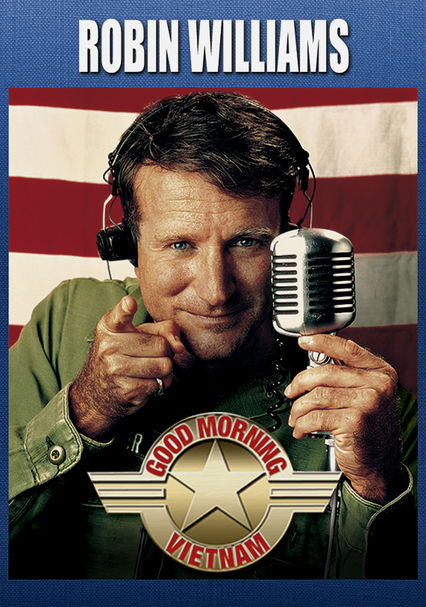 1987 R 1h 59m Blu-ray / DVD
When his manic radio show proves a huge morale-booster, Armed Forces Radio disc jockey Adrian Cronauer gets sent to Vietnam, where his monkeyshines -- lampooning any and all sacred cows -- tickle the troops but land him in trouble with his superiors.

Parents need to know that, compared to the sexual and violent content of some of today's PG-13 films, this one is tame. But its themes of relative morality are definitely adult in nature. The violence (infrequent but sudden) serves specific purposes. A bar brawl is spurred by some GIs' racist behavior; an explosion at the same bar (which kills two people) sets up storylines that ultimately question the premise of the Vietnam War, as well as the freedom of information allowed at that time. Foul language occurs mostly in the form of jokes.

Several jokes based on sex. Soldiers socialize with what appear to be Vietnamese prostitutes in a bar.

There is a bar brawl and a bomb blows up at a bar, the latter of which shows the dead and wounded. There is also a sequence of shots during the song "What A Wonderful World" that depict war time violence (e.g. burning villages, explosions, people being executed).

Frequent swearing in both comedic and serious moments.

Questions the premise of the Vietnam War, as well as the freedom of information.

Some drinking and smoking. The main character gets drunk once.